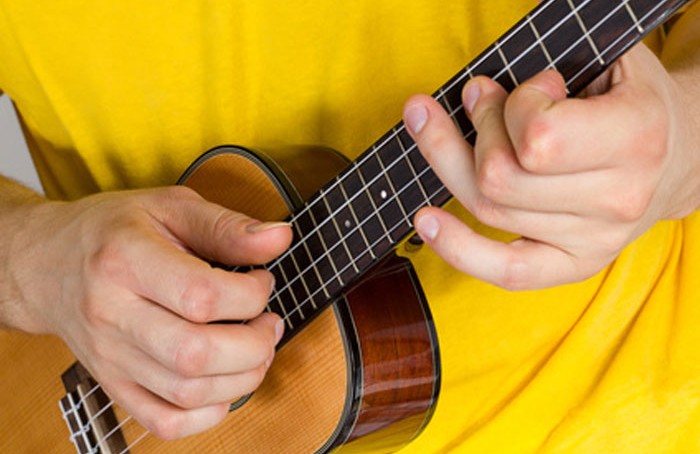 You need to listen to the song to know that. Usually users share them in the comment section for tab…

People believe that the Ukulele is one of the easiest instruments to play, and they are quite right: it will just take you a few minutes to learn some chords and play your first song. (Being an accomplished player is another story…)

First, you need to tune your uke. As for any instrument, it’s very important to play on a ukulele that’s tuned. Next thing is holding the ukulele.

If you ever played acoustic guitar, bass guitar, and so on, you will not have any problem. If not… you won’t have any problem either! I guess you’ve already seen a guitar player, right? Well, it’s the same thing. If you are right-handed, your left hand will be in charge of the neck, and your right hand will strum or pluck the strings. If you are left-handed, it’s just the other way around. 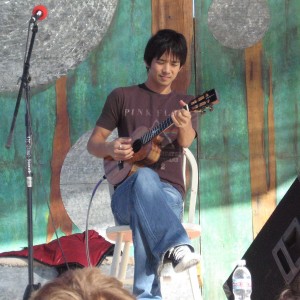 Simply pull the strings, from the fourth to the first one, with your right thumb. If your tuning is accurate, you will hear the distinctive sound known as my dog has fleas. What? My dog has fleas? Don’t freak out, it’s a mnemonic rule, the re-entrant way of tuning a ukulele is similar to this sentence… with a little imagination. 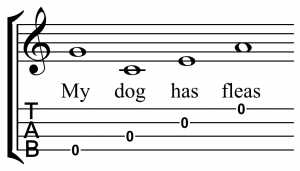 My dog has fleas
Illustration by Hyacinth (CC BY-SA 3.0 – original)

The mere fact of pulling the strings in the air (without pressing any finger from your left hand) is a chord. Here’s your first chord! You just played a C6.

C6 chord on the Soprano

As it doesn’t deserve much credit, we’re going to play our first chord involving our left hand. We simply have to pull the first string on the third fret (this is the C note). As a matter of fact, your finger must be in the space between the second and third fret, as close as possible to the third one without coming on top of it, and you must apply just the right amount of pressure required to make it sound right. Insufficient pressure will sound faint or won’t sound at all. An excessive pressure causes tune-out. It requires some practice. By doing so, we actually shorten the string length. Through shortening the string length, we increase the oscillation frequency, and therefore it sounds higher.

C chord on the Soprano

If we pull the strings again in the air, we will be playing the C chord (learn how chords are formed). Normally, you should find chord diagrams which tell us in graphic way which frets to press on. You can check out our article on chords, may you have any doubt.

We are now going to focus on the right hand (the left one, for the left-handed). This hand will be in charge of making strings produce sound, by making them vibrate. In general, we can use any finger from the right hand, though the thumb, the index and the middle finger are the most used ones. There is no secret to that, and it will come out instinctively. The technique consists in slightly pressuring from top to bottom (“towards the ground”), or in the opposite direction (“towards the sky”), on the string one wishes to play. Thanks to this very pressure, the string will escape from the pressure made by the finger and will start to vibrate. We recommend using your nail, though you can use your finger tip or a felt pick (avoid using guitar picks).

In order to practice, we can take any chord and play it one string string after the other, trying to be as precise as possible. We can go on and combine strings and fingers in different ways. It’s important to go slowly and to control your movement at all times.

In order to strum, one has to make a rhythmical movement with his right hand (once again, with the left-hand for the left-handed). The most basic strumming consists in playing 4 strings from top to bottom, and from bottom to top with the tip of your index (with the nail, if possible). Here is an interesting video to illustrate this:

As we said, the most basic pattern is to play with rhythm (for example quarter notes) and alternate the upward and downward movements. The rhythm patterns are written using the ^ symbol to indicate an upstroke, and the v symbol to indicate a downstroke. This is often written as  v^v^v^v^ or dudududu (for up/down), but the traditional notation is as follows (to learn more about music meters, check this page):

Here is how to play the above illustration:

As you can imagine, there are countless rhythm patterns for us to strum. We can make as many combinations as we want, such as down-down-up-down for instance, or combine various musical figures, insert rests, and so on. Our imagination is the limit.

One one the most famous strumming pattern for you to learn is vv^^v^ (dduudu):

There are some more complex strumming techniques, such as rolls or syncopated patterns, but let’s leave that for later. Based on what I just explained to you, you just need to learn 4 or 5 basic chords so you can play lots of songs and practice your strumming skills.

On top of the C chord, let me teach you the following chords to begin with: F, G and Am.

F chord on the Soprano

G chord on the Soprano

Am chord on the Soprano

Practice changing chords, in very slowly in the beginning, until your fingers “memorize” the positions (muscular memory). You’ll end up playing them without thinking about it. Gradually increase the speed. As for strumming, feel free to play all the variations that cross your mind.