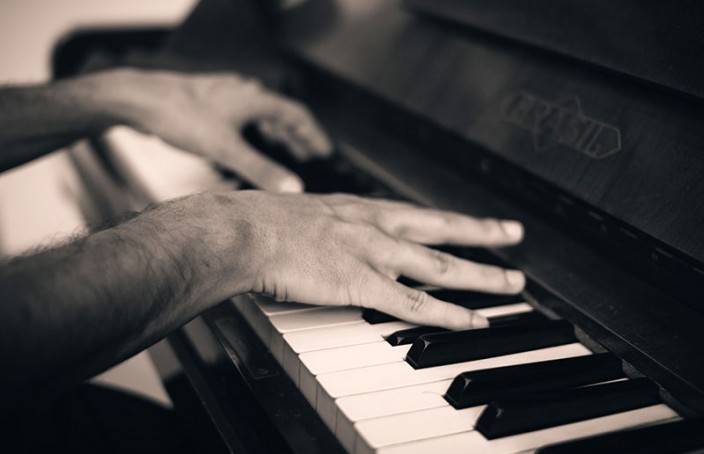 A chord is nothing more than the union of 3 or more different notes played at the same time. If it’s a union of 3 notes, we call it a triad. If we press 3 different keys of a piano (different meaning that they are not the same note, not even in a different octave), we will have a chord, we won’t know what his name is, but it is a chord.

Depending on how we form the triad (specifically, the interval or number of semitones there is between the notes forming the triad, we will have one type of chord or another. Usually, and this applies to all chords, we will have a “base” note, which we’ll call “tonic”, from which the chord will be named after, and from which semitone distances will be calculated to the other notes of the triad, in order to define the type of chord. In a word, we have 5 types of basic chords, depending on how we form the triad: major, minor, augmented, diminished and suspended. You can forget about the 3 last ones for now, it’s enough for you to know that they exist. Major and minor chord formation, now that is something you must stick in your brain forever. As you are progressing, you will begin to add suspended chords to your vocabulary, then diminished chords, and augmented chords to a lesser extent.

A major chord is always formed by the tonic, a major third and a perfect fifth. A perfect fifth is the note that is 3 tones and a half from the tonic (or seven semitones). They coincide respectively with degrees I, III and V of the major scale. We could also say that a major chord is a part of the major scale, specifically its degrees I, III and V.

A minor chord is formed by the tonic, a minor third and a perfect fifth, that coincide with degrees I, III and V of the minor scale. As you can see, it only differs from a major chord on the third, which is minor (one tone and a half from the tonic), as opposed to the major chord where it is an interval of a major third (two tones from the tonic). This apparently harmless difference completely changes the sound and character of the chord. It is usually designated by a small “m” next to the chord.

For example, the Dº chord (or Ddim), is formed by the D (tonic), F (minor third) and A♭ (diminished fifth). It’s interesting to stress that we didn’t use G♯ to refer to the fifth (although G♯ and A♭ would be enharmonic notes), since the fifth degree of D is A. The G note is the fourth interval.

These chords can’t be played alone, they create some kind of tension. The lack of a third gives them a sense of being sort of undefined, they are neither major nor minor. On top of that, the intervals of a major second and perfect fourth create a significant dissonance in the chord.

Let’s briefly introduce the concept of seventh chord. A seventh chord is made up of 4 notes, and is built adding an interval of a seventh to a triad. There are several types of seventh chords, but we are going to focus only on two of them. We will only deal with major triads on which a major seventh or a minor seventh is added, as these are the most common.

These concepts are quite important to know, it will help you in many situations.