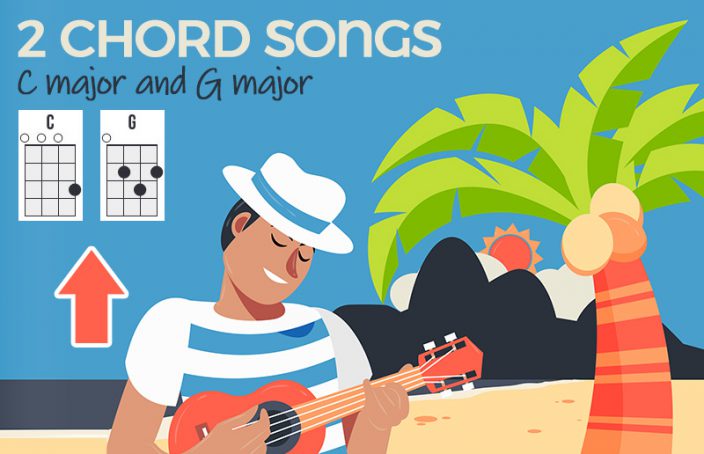 When we first start playing our ukulele it is common to learn just a couple chords, and usually those first two chords are C and G. In this article we are going to provide some great examples of songs you can play with a limited number of chords. That way from the very beginning you have something to show for each step on your ukulele journey!

We are going to stick to one of the common keys and in this case the Key of C. Most new ukulele players immediately learn C major and G major so let’s find some music that can be played with just those two chords. In western music the easiest and best sounding interval is the root and the fifth, that’s why it is so simple to write songs using only the chords C major (root) and G major (fifth). Most two chord songs of the root and fifth are going to be in the folk, gospel, and country genre, but we have a few that fit in the modern rock category!

Skip to My Lou (chords)

This song dates all the way back to the 1840’s, so while it may be a simple children’s song we have to give it some respect for such staying power. It switches back and forth quite simply between C and G without much fuss and is a great beginners song.

Mary Had a Little Lamb (chords)

As mentioned before, most songs that only have these two chords of C and G will often be kid’s songs or folk songs. However, it is always good to know these really simple tunes like Mary had a Little Lamb because you never know when you will have a young audience that will want to hear a familiar tune! Mary Had a Little Lamb can always be jazzed up a little, just like they do on Sesame Street! Ha!

Jambalaya (On the Bayou) (chords)

Hank Williams, who wrote Jambalaya back in 1952 (well he most likely co-wrote it based off an old Cajun melody), may have played it on a guitar, but it sounds great on the ukulele. This is another simple two chord melody that works with a basic uke strum. Sometimes when playing simple two chord songs we want to add a little spice with some fingerpicking since we don’t have too much going on musically. Once you have the basic melody and song down, experiment a little!

Down in the Valley (chords)

This is a folk country song from the 1920’s also known as “Birmingham Jail.” If you look this song up you will see some have it chorded with only C and G, while others use G7. Many folk songs that have two chords will sometimes use the 7th, if you haven’t learned G7 yet that is fine as you can still play the song, but you may come across this 7th again with two chord songs so keep an eye out. As a beginner it is usually ok to play just the G major, but hey it doesn’t hurt to learn it now! (The link above is for a guitar, many ukulele tabs of this song are in the Key of F and or G and while it is fine to play it that way, our goal is to stick with the chords C and G).

Here is another great example of the G7 being used in this old time American spiritual. However, it is fine to play G major in the place of the G7. It will still sound ok and your audience will never know the difference!

Give Peace a Chance (chords)

Even the amazing and talented Beatle John Lennon wrote his share of really simple songs. Give Peace a Chance makes a great campfire song, especially for the chorus. This song was written by John during his famous Bed-In with Yoko… ironically like playing this song, peace is really not complicated!

For those who grew up in the early 90’s, you probably wanted to scream after hearing this song played a million times! It wasn’t written by Billy Ray Cyrus, but he sure made it popular. Despite it being played much to often back then it is actually a great song for beginning ukulele players.

This 50’s song had a big comeback after the movie Beetlejuice, it is a traditional Jamaican folk song made popular by Harry Belafonte. While this song is simply C major and G major like the rest on this list, the key to playing it is to get the strum right. Jamaican and reggae type songs often have an emphasis on the 2 and 4 beat, so strum with a percussive type effect on these beats as you play the Banana Boat Song. Also leave some space in the strumming when necessary, like in the first line hit that C chord once and only sing until the next Day-O… you’ll get the feel for it!

Sly and the Family Stone has always been one of my favorite bands, and their song Everyday People fits our two chords of C and G perfectly. Now we are breaking a rule here, the linked tabs are actually in the Key of G, but this song uses C and G and is not a bad ukulele song.

It is important to realize than many of these tunes above can be found on numerous tab sites and in a variety of keys. As you learn to play ukulele you will find tons of information out there, some good tabs and chords, and some bad. Its up to you to use your ear to discern what does and doesn’t work. The main goal with showing a variety of two chord songs is to show you that learning to play ukulele is not difficult, with a little musical knowledge you will be able to play many songs!