For those who are beginning to play ukulele, here is an article for you about two basic rhythm patterns that everyone should know, and which you’ll be able to play along on most of the songs. The song becomes alive when an interesting rhythm is added to it, so the person listening to you will pay more attention. In this post, I wish to introduce you to four rhythm patterns for ukulele, the most basic and the easiest you will ever play, the must-know rhythm patterns for any ukulele player. We will also see a few tips to improve on the strumming.

The way to learn how to play any rhythm pattern is by diving the measures into eighth notes. Let’s take, for example, 4/4 meters. In each measure, we will have 8 eighth notes (check this tutorial for more infos). If each rhythmic stroke were to be played, the direction of the right-hand would alternate upon each stroke : down, up, …

For this tutorial, we will apply the following conventions:

Downstroke in dark-blue, upstroke in red

Beats are written with numbers. Since most of the songs use the 4/4 meter, there will be 4 beats, written as four numbers: 1 2 3 4. The appropriate strumming on a specific part is shown below.

This is the most simple strumming you will learn, it’s completely made of downstrokes. We just saw this strumming, but we put it once more, to make sure it’s clear:

Start counting numbers up to four out loud. Every time you say a number, strum the ukulele downward. Once you have reached four, repeat this process. Do that a couple of times, and you’ll have mastered one basic rhythm pattern. In order to do that as a real ukulele player, instead of saying the number out loud, try to mark the beat with your left foot. 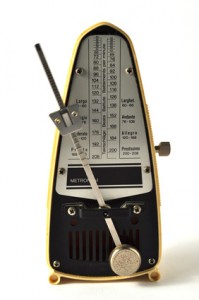 You can also get a metronome and strum the ukulele on each click.

This is the exact opposite of the previous strumming, instead of going downward on each beat, we are going to go upward. It may be a little difficult in the beginning, since the upstroke is not as natural as the downstroke is. Don’t worry if you don’t follow the rhythm very well in the beginning. Try that a couple of times, and you will soon be playing upstrokes.

This is when things start to get complicated. Instead of counting up to four, you need to say out loud: “1 AND 2 AND 3 AND 4 AND”, stressing the ‘AND’. When you say a number, you play a downstroke. When you say AND, you play an upstroke. Do it slowly and take your time on each stroke. Don’t worry if it doesn’t come out well the first time, this is not the most intuitive strumming. But once you manage to do it, you will notice that you can use this pattern on many different songs.

What we are doing here is, basically, breaking the beat, not in four, but in eight strokes. In other words, we are striking twice per beat (=8 x eighth note), when we used to strike only once before. What’s even more important, stressing the AND instead of the number, we are making sure to have our upstrokes sound more than our downstrokes.

This is strumming the ukulele: it is about mixing and finding an emphasis in different rhythms. Don’t worry if you don’t manage to do it the first time you try; this is something you‘ll learn with practice.

Did you see what we just did here? We have removed a stroke from the 3rd stroke. It means that, when following this pattern, instead of playing a downstroke when you say the number 3, you will not play anything. But here is the thing: instead of holding your hand off when you reach the third beat, you must continue the movement of your hand over the ukulele strings. Notice that you are leaving the ukulele open, your hand is hovering over the strings without striking them.

This may be hard in the beginning. You have to move on top of the strings without breaking the beat. Your hand must keep on moving, since it must be moving as if it was strumming on the third beat. On the next step, you must strike the strings on the AND, with an upstroke, following the same rhythm pattern.

Now that we have learned how to remove a stroke, let’s raise the stakes and remove three strokes.

This will be harder, even if you took your time on strumming pattern 5. You will need to slide on top of the strings three times within a measure, on the AND following the 1, on number 3, and on the AND that follows number 4. The last part, the AND after 4, is the hardest part for most beginners, so make sure you practice that a lot.

These are the core strumming patterns for ukulele. There is an infinite number of strumming patterns out there, but you need to learn the most basic stuff as a beginner, don’t focus too much on these until you improve your skills. Instead of that, play what feels “natural” to you. Following a pattern very closely can become boring and mechanical. Don’t be afraid to change the rhythm, if you feel that it matches the song better.