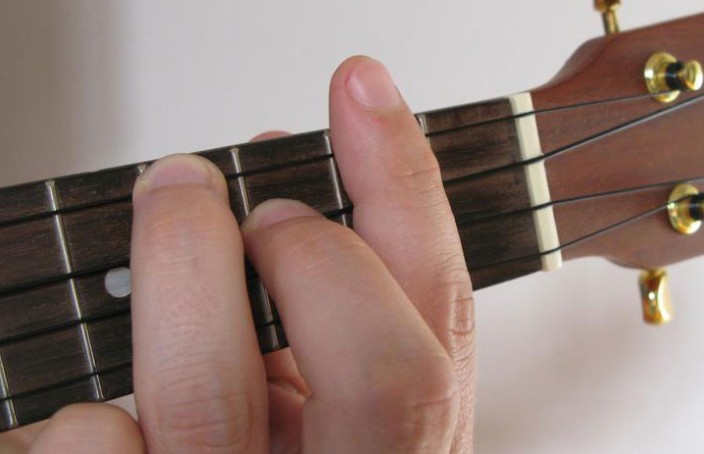 Barre chords, or Bar chords, are usually a nightmare for guitar players, nigh impossible on the mandolin, but lucky for us, much more manageable on the ukulele. A barre chord is made by pressing down on one or more strings across the ukulele fret, often completely across, but occasionally only partially (known as a partial barre). To put it simply place your finger on the bottom string 3rd fret to make the well known C chord. Now place your index finger completely across all the strings on the second fret and your pinky finger on the bottom string 5th fret. You have basically taken the C chord shape up two frets to make it a D chord.

That’s really the simplicity of barre chords, once you have the shape of a chord you can move it to make another chord (also known as moveable chords). Your index finger acts as a moveable nut and your other fingers are used in place of the index. Barre chords go hand in hand with moveable chord shapes. There are a couple factors to making a good barre chord. First of all, you need to have a proper uke with great action, as mentioned in the buying guide it has to be easy for you to press the strings down. This is one reason guitar players have a more difficult time, it is not easy to press all 6 strings down on the guitar. Besides great action on the uke, you need to build up your finger dexterity. All uke players know how difficult the E chord can be, it takes time to finger it with proper technique. You need to practice stretching your fingers and get them used to bending in peculiar ways, especially for barre chords.

Barre chords help when you may be having trouble with a chord fingering (you can always try another), for when you don’t have a capo, and when you are attempting to play in different keys. Barre chords also allow you to play different inversions. Remember an inversion of a chord is a different order of the notes. One inversion of the C chord is the root position which is C-G-E, while another inversion is E-C-G with the E as the bass instead of C. Because barre chords are moveable chords it helps to know the most common chord shapes that can be moved up the ukulele.

Barre Chord based on C Shape

Now as we mentioned if we move this C shape up two frets we get a D major chord… move it two more frets and have an E Major (which is an easier E Major to use!). Remember with a barre chord your index finger takes the place of the ukulele nut as you move it up the neck.

Barre Chord based on F Shape

The F shape is another easy barre chord, if we move it up two frets we get a G Major, and two more an A Major. The pictures below show your index finger only covering the bottom three strings, it is also just as easy to cover all 4 of them with your index.

Barre Chord based on A Shape

What about the Bb Shape…?

Barre Chord based on Am Shape

Of course barre chords exist for minor chords too! If we move the A Minor up two frets we get a B Minor, and so on up the neck.

Barre Chord based on C6 Shape

When you press NO strings down on the uke you get the chord Am7 or C6 (both are the correct names in this case), this is another shape that can be moved up the neck. 5 frets up gives us the F6 (this is a fun chord shape to play starting at the F6 and move back to the top of the neck striking each fret!).

While Partial Barre chords do exist they are most often used for guitar and larger instruments. Some people will use partial barres to “cheat” on a ukulele chord, but in the end the chord doesn’t sound as great. For example, if we go back to the C shape and give it a partial barre at 0447, the new E chord doesn’t sound as full as the proper 4447. With the partial we also have to be careful of not hitting that first string and messing up the whole chord. So when it comes to ukulele it is wise to just practice full barres.

As you can see above, the Bb shape can be played by only barring the bottom to strings, but it is probably easier to just barre all the strings when making the shape.

The case of the E shape below is a bit different, because this time you will have to bar strings using your ring finger, not the index finger. To do so, just place your index finger on the bottom string and bend your ring finger to hit all 3 top strings. Basically we use our index and other fingers in the way that is the most comfortable.

We all know how difficult the E Major is to play, but once we learn it we can have a great movable chord, move it up one fret and we get the F Major.

Sometimes a barre chord can be a mix of a full barre along with a partial. In this case you usually have your index finger covering one whole fret and your middle finger covering a partial second fret as in the shape below.

When we move this shape up a couple frets we have to let our ring or pinky finger do the rest of the work. It’s not an easy barre but worth knowing (talk about a stretch for your fingers).

Not only do barre chords give us another way to play a certain chord, they also help with a different sound in our songs. Play the progression of C-F-G-C using the normal and common chord positions you have learned. Now play that progression like this 0003, 2010, 0232, 5433, 0003. The 5433 is still a C chord, however it is a higher pitched barre chord that gives the progression a little different feel with a flourish at the end. Sometimes adding a barre in the mix can give the song a bit of complexity when in reality you are still playing the same basic chords. Your audience will think you are a Uke virtuoso when you are still playing the same basic chords!

As you practice the barre chords make sure every string is sounding. For example, make the F barre starting at the second fret, which will give you a G major. Slowly play every string to make sure you have the barre right. There should be no muted or dead strings, each one should ring out and sound when strummed. It takes time to build up finger strength on these barre chords, but shouldn’t be too difficult on the strings of a Uke. Take a moment to make some of these barre shapes across your uke fretboard and quiz yourself to see if you can quickly name the chord you have made. Happy barring!