The circle of fifths is a way to represent the relationship between the 12 tones found in western music, as well as the alterations that each tone has. It is represented as a circle, like a clock, displaying tones instead of hours, with the C scale located on the “twelve” spot of a clock. Each tone is separated from the previous one, clockwise, in an interval of a fifth. If we go counter-clockwise, it is the interval of a fourth. 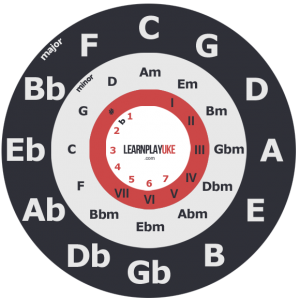 Surprisingly, this kind of representation allows to classify the different scales by ascending number of alterations. If we go fifth by fifth (clockwise) the number of sharps increases. If you check on the previous image, C has no alterations, G has one sharp, D has 2 sharps… until reaching F# that has 6 sharps.

On the contrary, if we go fourth by fourth (turning counter-clockwise), the number of flats increases. As we know, C has no alterations, F has one flat, B♭ has 2 sharps… until reaching G.

Although it may look like a mere curiosity, it is very helpful when we need to find out the number of alterations a key has, and therefore, its major and minor scales, and the corresponding chords. Remember this “trick” by hear, and you’ll be able to get the chords for a key within seconds, and without having to count intervals!

In order to do so, we are going to memorize the circle of fifths starting from the F (instead of the C), and knowing that F has 1 flat and that C has no alteration. It’s the only thing that you need to memorize.

So, according to this order, we know that F has one flat, C has no alterations, G has one sharp, D has two sharps, A has three sharps, E has 4 sharps, and finally the B key has 5 sharps. Now, let’s say that we want to figure out the A major scale. We know it has 3 sharps. Which notes will be the sharp ones? Well, the first 3 ones from our circle of fifths, which we just memorized, that is to say, F, C and G. These 3 notes will be sharp, the rest will be natural notes.

Well, the intervals match! It must be a coincidence, let’s try with the D major scale. We know that the D scale has 2 sharps, which should be F and C.

It matches too! Incredible, isn’t it?

And what about the scales that are not in our circle of fifths? Let’s take an example, let’s try to figure out the notes for the G# key. Well, it’s very simple, we start from the scale without alteration, in this case G, and we move everything up a half-tone. We know that the G scale has one sharp (F#):

We move everything up a half-tone:

One must always respect the note in each interval. Even if we know that B# is actually a C, we must keep the B# on the scale. Just like F## is a G, we have to keep the F on the seventh degree.

If we want to find out about the notes of a scale that has flats (i.e the F scale, or any scale that has a flat note as its tonic), we will use the circle of fourths (counter-clockwise), and we must follow this order.

It works in a similar way as with the sharp notes, except that we start from B♭ which has 2 flats, and we finish with G♭ which has 6 flats, and the exception is F, which has 1 flat, as we already know. If we wish to figure out the notes for the A♭ scale, we know from the circle of fourths that A♭ has 4 flats:

With this simple method, we can find the notes of a scale in no time, and from there the chords forming the chord progression. Practice a little bit and you’ll see that it’s very simple.