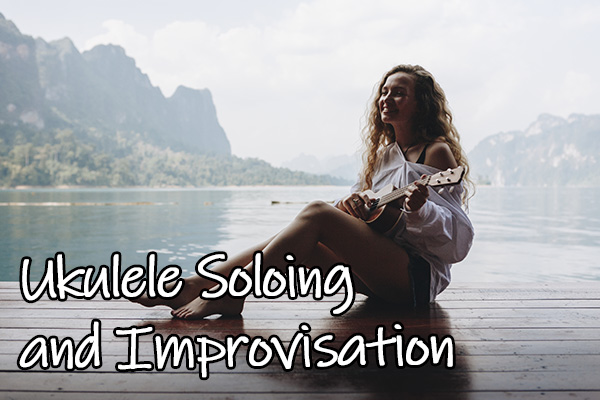 One of the better ways to become a better ukulele player is to find others to play with. Granted this may not be easy given where you live, but the good news is that more and more people are taking up the hobby. If you absolutely cannot find anyone else to play along with there are plenty of apps and software these days to help accompany a player (it is ok to use guitar or other instrument backing tracks when learning to solo, it’s just like playing in a band). When it comes to learning how to solo or improvise on the ukulele it is also fine to learn on our own, but we eventually want some other musicians to help our solos to stand out.

What is a Solo?

Most of us know that a solo is a section or piece of music played by a single performer. Usually when people think of solos and music they picture your average guitar solo from a rock n roll song. Often during a solo, the rest of the band will continue playing the rhythm of the song while the soloist plays a fitting but unique passage. The key to learning how to solo is just jumping in and doing it. We will cover the basics and first steps, but in the end it is your job to just play what you think might work… and then of course remember what you did so you can repeat it later! Sometimes a solo can be made up of pieces of the songs melody, other times it can grow to become a creature of its own. There is rarely a right or wrong for soloing, it is just what sounds good.

There it is again that dreaded music theory, you can dive blindly into playing solos, but knowing your theory gives you a major boost. First off we want to know what key the song is in, and what music scale works great with it. One of the most common scales for solos is the Minor Pentatonic Scale, remember a pentatonic scale only has 5 notes instead of the normal 7 notes. With only using the 5 notes of the pentatonic we stand a better chance of the solo sounding like it fits. For example, if I am playing a song in the Key of C and my bandmate starts soloing in the Key of B… it’s not going to sound right, unless we are attempting some Avant garde noise music! (Which may be interesting on the ukulele!). Also we don’t want to necessarily play the notes of a fitting scale in order, we want to jump around, and repeat notes when necessary. The scale is only there for reference, not to be copied exactly.

When you play a solo you want to start and end on the root note to give the solo a defined area. Start on the low C of the 3rd fret and using the image above play around with the main notes in that chord progression. You see that when we stick to the notes of C-G-F that the solo sounds simple, but fine. Now add some more notes of the chords in, after time you will notice that the E and the A just don’t sound right, like they are lacking something. This brings us to the scale mentioned above, the Minor Pentatonic and for C the notes are: C-Eb-F-G-Bb-C

Now play the same chord progression above of C-F-G-C, and this time solo with the minor pentatonic notes. Start with C as the first note and just play the new notes in various orders trying out whatever sounds good. You’ll notice right away that the Bb and Eb in that minor scale give the solo a bluesy and rock n roll feel. They sound way better than the E and the A (which is the major pentatonic scale, not often used in solos).

That is what soloing is all about, is finding the notes that fit well into your song. There are no set rules and sometimes notes that don’t fit the scale may just fit the solo. But first we always start with the key of the song, the most basic scale and notes, and we build from there. (If you know all your ukulele scales by heart, this process will go a lot faster!)

Of course you can get by with using the Minor Pentatonic Scale on most solos and you will sound great, but eventually you want to branch out to include other notes. Once you start playing single lines you can always add in more notes as layers in your solo. Of course in genres like jazz the idea is to really get out there with crazy added notes, but for most ukulele players the basics will work fine.

Ukulele players must remember their re-entrant tuning. If you have a high G string on your instrument don’t forget that can change the feel of your solo. Often when I am soloing I do my best to leave the G string out of it, so I can focus easier on where my notes are in comparison with one another.

Don’t stop once you start, just go with it. You may hit wrong notes, just fix it and keep playing. If you hit a sour or bad note, it often works to move one fret down or up. For example, above if we play C-Eb-F-G#, after the G# we move down to G and not only does the solo “correct itself” but it actually sounds pretty cool. And that right there is why you just jump in and play a solo, wrong turns can eventually lead you the right way!

Playing fast doesn’t always equal a great solo, sometimes playing steady and hitting the right notes sounds amazing. Once you get to know the ukulele fretboard really well you will have time to actually think about your next note while jamming with friends or on stage.

If you don’t have other musicians to play with, your best bet is YouTube. By searching backing tracks we can find help in all keys, a lot of it is made for guitarists, but that doesn’t matter it will still help you learn. Pick a key, find the notes that are best suited to that key and start the track. As it plays improvise basic root notes at first, add in some minor pentatonic scales notes, and from there just experiment with what sounds the best. Here are some sites with a variety of backing tracks to help you learn to solo; for ex. a ukulele backing track in Am: