the body of the uke is the soundboard, which allows to amplify the strings vibration. The body is basically made of 3 parts. The top soundboard, which is the most important in any acoustic instrument. Its calibration, the quality of the wood used for it, and so on, define most of the instrument’s final tone. The two other parts are the sides and the back. In the interior part of the body we will find the bracing, which purpose is to reinforce and support. It is a vital part too, as an overly rigid bracing may drown the sound out, since it would not allow the soundboard to vibrate properly. Normally, the body is made of wood, although metallic bodies (such as the National Resonator models) can be found, or other less usual materials such as plastic (the Fluke models for instance). Types of woods used can vary from Hawaiian Koa, to mahogany, cedar, spruce, maple, rosewood… 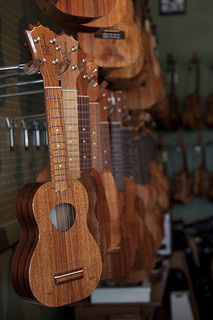 The neck is usually glued to the body. Here, we have the fingerboard and the frets, which we use to change the length of the string to change the sound. The material used for necks is usually Koa or mahogany wood in most cases. On the uke, the frets are placed so that each one is a semitone. Right before the first fret, we have the nut, normally made out of bone, though some made of synthetic materials can also be found.

Tuners are a mechanical parts used to tighten the strings. Regulating the tension allows us to tune each string to a specific note. There are various types of tuners : friction, mechanical, open, closed… Tuners are found in the headstock (the top end of the neck). 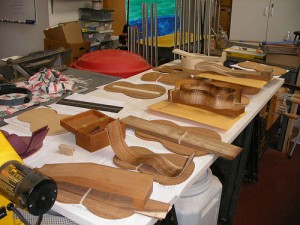 Ukes being built
Photo by Pieter Hartsook (CC BY 2.0 – original)

The bridge is a part that’s glued to the top soundboard. It has a critical function : transfer the vibration from the strings to the top soundboard, so they can be amplified inside the soundboard. The distance between the saddle and the bridge defines the scale of the instrument and the placement of the frets. Basically, there are 3 types of bridges. Tie bridges are the most common ones, strings are passed under the bridge and knotted to it (same as on a classical guitar). Pin bridges work like on acoustic guitars, the string is fixed in a hole in the bridge by parts called the bridge pins. Finally, we have slotted bridges, which have a small slot to pass the string into and tie a knot in the end to fix it. 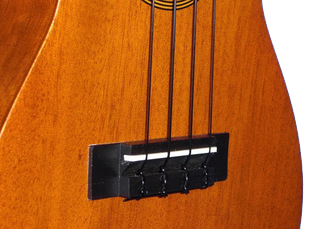 Did you know that there are different sizes of ukulele?